Showing posts from May, 2007
Show all

May 28, 2007
Happy Memorial Day! Although when you consider the somber nature of this holiday, wishing HAPPY Memorial Day doesn’t seem quite right. What then IS the proper greeting? For most of us today marks the unofficial beginning to summer. I’m no different. It’s a day off. Well, no yoga classes tonight anyway. I did not have the luxury of sleeping in, though. Sammie gets her meds today, so I was up at 5AM. And since I was up anyway, I got in a half hour of working out with weights. Then hubby and I headed for the bike trail well before 9AM. Back to the nature of the holiday for a moment. On our way to the bike trail, we drove past the new National Cemetery of the Alleghenies. It’s our local version of Arlington National Cemetery, but it’s still under construction, so at the moment, it lacks the quiet, dignified beauty of Arlington. Still, the small cluster of vivid white grave markers serve to remind what this day is all about. Perhaps I’m a little more aware of it this year than most. My
Post a Comment
Read more

May 24, 2007
One of the peculiarities of southwestern Pennsylvania is the way winter collides with summer. Oh, sure, there’s such a thing as spring serving as a buffer zone. But spring is unpredictable, unreliable. And brief. It’s also my favorite season. Even if it only lasts three days. Those are probably the only three days out of the year when I don’t complain about the weather. All winter, I moan about being too cold. I complain about taking ten minutes to pile on layers upon layers of clothing just to run outside to shake out rugs or fetch the mail. Then fickle spring teases me with sunny, warm afternoons only to dump rain on the days I make plans to enjoy the outdoors. Saturday morning I had ice on the windshield of my car in the morning. Yesterday, I sweltered with windows thrown open and ceiling fans running full tilt. Instead of grumbling about the cold, I was whining about being too hot. This morning I had hubby put the window air conditioner unit in the bedroom. It’s a big unit and
Post a Comment
Read more 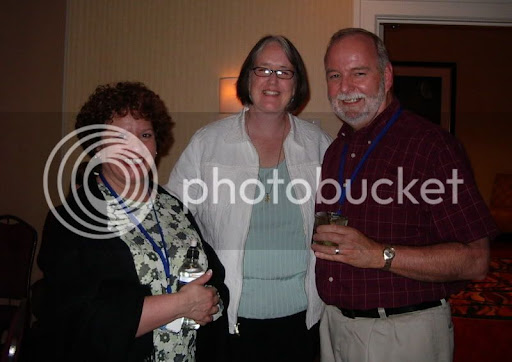 The Pennwriters Conference, 2007 version, is history. I think I left some of my brain cells there, because I don’t seem to functioning very well today. It was great fun. I reconnected with old friends from across the state, made some new ones, and put some faces to names of folks I only previously knew from the Internet. Besides being on the planning committee, I’m also the local area rep, so there were a few demands on my time. I would have loved to sit down for long conversations with several attendees, but kept being called away. So I had to settle for lots of quick chats on the fly. Hands down, the most terrifying moment was Saturday afternoon when I took part in my first ever panel. Finding an Agent. The panel had been steadily growing all during the planning phase. We started with three of us, then there were four, and by the time it came to fruition, we had seven panelists. Six of the seven, I already knew and were fellow Sisters in Crime. The seventh, our token gentleman, tu
3 comments
Read more

May 17, 2007
I’m feeling overwhelmed. The Pennwriters Conference is this weekend. As in tomorrow. I’m on the planning committee, which means, for me, it begins later today. As in after lunch! I love the Pennwriters Conferences. That’s where I met my agent last year. This year it’s being held a little closer to home. And since I have to run back and forth to give Her Royal Highness Princess Samantha her medicine, that’s a good thing. It’s been suggested by well-meaning friends that I bring her with me, get a room (I think this hotel allows pets), and leave her there. In a word—NO. I have visions of a maid accidentally letting her out of the room and of me frantically searching the entire hotel calling for her. “Here kitty, kitty.” No. Sammie stays home. I’ll spend the megabucks on gasoline to drive back and forth a few times. She won’t be stressed by being in a strange location. And I’ll know exactly where to find her. Travel and cats aside, the conference offers enough reasons for me to be an
1 comment
Read more

May 14, 2007
It’s been a while since I posted an update on my cousin. Patty is doing remarkably well. She knows who we are now and can carry on a conversation with us. She’s been told about the crash and about her husband’s death and is understandably upset about it. But there are also signs of her sense of humor coming back. Friday, when my mom and I stopped in to visit, Patty managed to grin a time or two. She’s eager to get out of bed and get moving, but her leg hasn’t mended enough to begin rehab, yet. But we’ve been assured that’s coming soon. This is a gal who never sat still for more than five minutes, so all this laying around and doing nothing is getting to her. Last Monday, she went in to see the neurologist who said that with the progress she’s made in recent weeks, he’s optimistic for a full recovery. That’s the best news we’ve had in well over a year. On the other end of the spectrum, my Sammie kitty is beginning to show symptoms of her cancer. For months I’ve been paranoid, watchin
1 comment
Read more 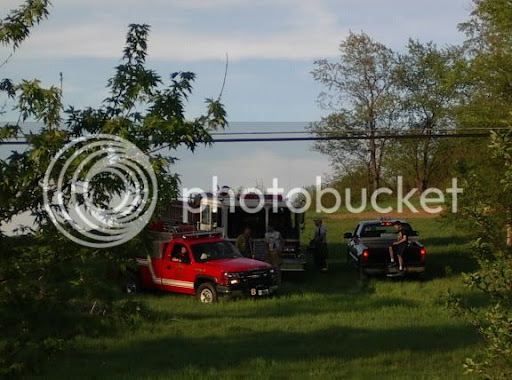 I had a ring-side seat for some unique entertainment last night. First, let me explain the setting. I live across the road from what used to be my grandparents’ (and great-grandparents’) farmhouse. Over the last twenty years of being vacant, it has fallen into a state of extreme disrepair. Broken windows, broken shutters, missing chunks of roof, the front porch and several chimneys have collapsed. It’s heartbreaking. I grew up in that house. It has served as the home for several of my characters (the livable version that I remember from my youth, that is). The guy who owns the property doesn’t live on or near it. He has no history with the farm, so he has no attachment to it. Unlike me. But the sad, abandoned farmhouse has a new purpose. One that I greet with mixed emotions. It’s being used for fire school. To those who don’t know about such things, firefighters learn their craft at fire school. Our county owns property where they hold trainings. But nothing beats a real structur
1 comment
Read more

May 09, 2007
May is a busy month around here this year. Monday, I had the pleasure of attending and volunteering at the Festival of Mystery in Oakmont. I had to play hooky from teaching my yoga classes that night to be there (thanks, Shivani, for filling in for me). I had the honor and pleasure of driving Sarah Stewart Taylor from the airport to Oakmont. Once the festival got rolling, I spent a little time at the table where Elaine Viets’ books were displayed and talking them up in her absence (see my blog from []). Then another gal took over filling in for Elaine. I gave her a name tag to wear identifying her as “Virtual Elaine.” Then Nancy Martin asked me to sit and sell her books while she did her networking thing. So I became “Virtual Nancy.” I figure, I was practicing for the day when I’ll actually be hawking my own books. It was nice to see old friends at the Festival and to make new ones. Now that the Festival is behind me, I’m on final countdown for the Pennwriters Conference coming
Post a Comment
Read more

May 07, 2007
Last Wednesday over on the Working Stiffs blog, I talked about the Kentucky Derby and I stated there that I liked Tiago. Well, I still like him. He didn’t win, of course. I had written that post before I had a list of the entrants and past performances to study. Hanging out at Mountaineer has at least taught me to read the racing form. I studied the performance records of all twenty entrants (is that really a horse race or more a stampede?) and narrowed my picks down to five. Not including Tiago. Like Curlin, he had only raced three times and I had a hard time believing that a colt with that little experience could deal with the all the hoopla and spectacle of Derby Day at Churchill Downs. But I still like him. Ten minutes before the race, I announced to my husband my one pick. I don’t put any real money on horse races any more. But I like to place “virtual” bets. Of the five I’d selected, I decided to place my virtual money on the one with the best post position. Street Sense. I
Post a Comment
Read more

May 03, 2007
I met Elaine Viets at last year’s Malice Domestic . I didn’t meet her in such a way that she would know who I am. She was on a panel that I attended because a couple of friends were also on it. For those who don’t know who Elaine is, she writes the Dead-End Job Mystery series. She’s also one of the bloggers over at The Lipstick Chronicles . She’s a lovely woman, smart, and wickedly funny. And a few weeks ago, she suffered a massive stroke. The good news is, she’s recovering splendidly. The bad news is her latest book was just released and she isn’t able to go on tour with it. Mystery writers, however, are a tight-knit community and we take care of our own. There is a move going on to help promote Elaine’s book through all means possible. Other authors are pushing her book at the same time they’re promoting their own. I’m still waiting for a publishing contract to give me a book of my own to promote, so in the meantime, I’m here to say GO OUT AND BUY ELAINE VIETS’ NEW BOOK! It’s
Post a Comment
Read more