Showing posts from February, 2010
Show all 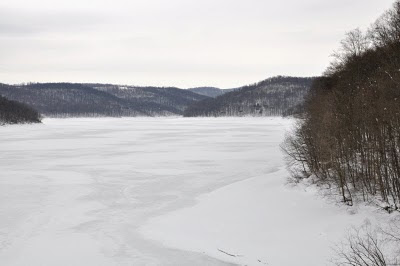 Nothing quite says "COLD" like a frozen lake. This is the Yough Lake just above our camp in Confluence.
5 comments
Read more

February 24, 2010
I'm contemplating the purchase of a new computer and need all the help I can get. Over at Working Stiffs today, I'm seeking advice. Come on over and add your personal preferences and experience to the debate of Mac vs. PC
Post a Comment
Read more

Winter in the Mountains 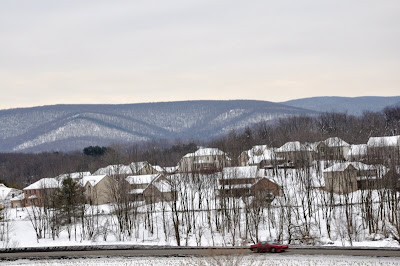 Not long after the big snow storm dumped two feet of snow on us here in the Pittsburgh area, followed by two more storms that deposited several more inches of the white stuff on top of the original blanket, we started wondering how our camper in Confluence was faring. Confluence is nestled in a deep valley within the Laurel Highlands, which notoriously gets hit with twice as much snow as we do. Reports of four, five, even six feet of snow in the mountains was followed with reports of building collapses. Heck, we had buildings collapsing around here without all that additional snow. Hubby’s concern gradually grew into a full-out panic and the decision was made to drive down there and see if the camper was intact or smashed like a tin can in a trash compactor. I was up for an adventure and Sunday morning, we loaded up the old Chevy pickup and headed out. Camping kitty Skye had to stay home, much to her chagrin. The further we drove, the deeper the snow. And the bigger the icicles. I
8 comments
Read more

February 20, 2010
Everyone makes goals and resolutions on New Years Day. But there is one other day that motivates me to revisit and revise those goals. The day I meet with my accountant to get my tax returns done. That happened this week. He tends to ask questions like how much money do I think I’m going to make this year with my writing. I hear all you other writers out there laughing hysterically. Yeah, I wanted to do that, too, but I contained myself. But the questions did make me do a lot of thinking. And the conclusion I’ve come to (again) is that I waste too much time. Well, not waste, exactly. I spend too much time doing stuff that others want me to do instead of what I need to do. If I intend to make my accountant happy and MAKE MORE MONEY at writing this year than last, I need to WRITE. Big a-ha moment there. Remember when I was making my list of goals for 2010 , I mentioned one that I couldn’t reveal yet? Here’s the story. I terminated my contract with my agent. I’ve sent the certified
5 comments
Read more 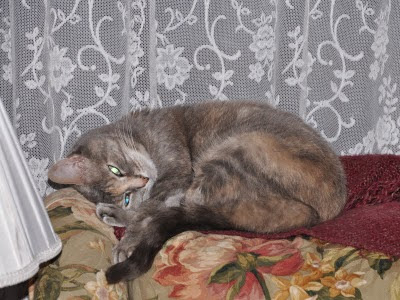 I've long insisted that I suffer from Seasonal Affected Disorder (SAD), but this year I seem to have company. Skye kitty has been acting a bit depressed, too. She's recently been to the vet for her upset tummy and the new prescription diet has solved that issue, so I don't believe that she's sick. She doesn't act or look ill. She just seems to have the blahs. Like me. I truly believe that some sun and warmth will cheer us both up.
6 comments
Read more

February 17, 2010
I'm over at Working Stiffs today, and wondering why in the world I set my current WIP in winter. If I'd set it in the summer, I'd at least get to escape into the warm corners of my mind while writing.
Post a Comment
Read more 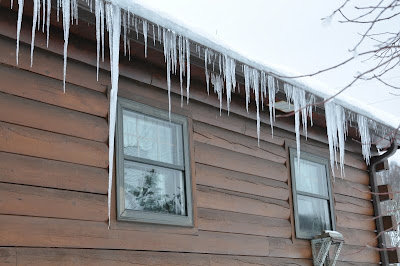 This is the crop of icicles that have sprouted from my house. And they're GROWING!
5 comments
Read more

February 11, 2010
When a person has electricity in the middle of a state of emergency, where most of her friends and family do not have electricity, that person should never mention that she has electricity. Even if that person doesn’t mean to be bragging about dodging a bullet. It’s a law of nature. By simply saying she’s been lucky, the universe will sneak around behind her and slap her. Yes. After being fortunate enough to have NOT lost power during the monster snow storm last Friday, we did indeed lose it on Tuesday morning. Another storm was in the forecast, but at 11AM, it wasn’t doing a blessed thing. I had a ton of online work to do and was attempting to get it completed JUST IN CASE we weren’t so lucky during this second storm, when BAM. Without a flicker or a hiccup, the lights just went out. Oh, I have my computer plugged into a battery-powered surge protector, so I was able to save my work and shut everything down without losing anything. But there would be no more computer work on THAT da
10 comments
Read more 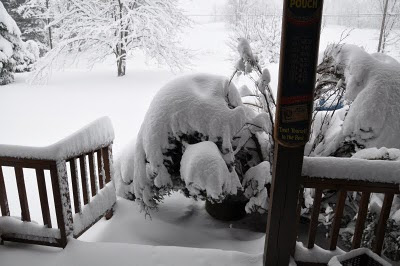 We've had a bit of a snow storm here. HA! I love the art of understatment. Here are two shots taken from my front porch yesterday morning. And here are two taken through my bedroom window this morning. It's pretty when you're on the inside looking out. When you're outside, up to your knees and shoveling for three hours, it loses its appeal.
9 comments
Read more 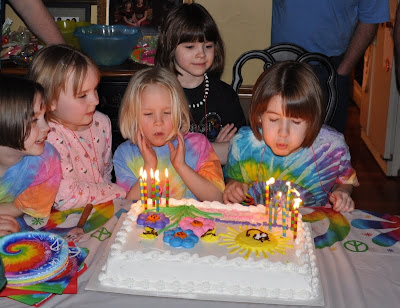 My grandniece and her cousin shared a birthday cake last weekend. I just love the expressions on all the little faces.
5 comments
Read more

February 02, 2010
More years ago than I care to count, I attended a wedding photography seminar. That was back in the days when I ran a business called Dashofy Photography. I remember very little about the workshop other than the speaker was from New Orleans and had a marvelous accent. And I remember one point he made. He discussed how wedding photographers running their own business had to use both the right side and the left side of their brains. Left side for business. Right side for creativity. He painted a mental picture of a switch on the tops of our heads that we had to flip back and forth. Frequently. He said if you weren’t careful, you’d be like him and would wear a hole up there. (He was bald!) I haven’t done wedding or portrait photography for years. But that right brain/left brain thing has stuck with me. Instead of photographs, I’m writing stories. Creative. Right brain. But writing and publishing is a business. Left brain. Plus, I’m now working as an Independent Sales Representative for
4 comments
Read more
More posts