Showing posts from February, 2012
Show all

February 22, 2012
I'm over at Working Stiffs today and we're playing the If Money Were No Object game.
Post a Comment
Read more

Spring Fever at the River 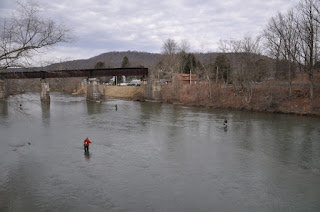 To continue with the theme of spring fever from my last post… We decided to drive to Confluence on Saturday to “check the camp.” Now, this would be a logical and necessary chore if we’d had the kind of snow we had two years ago when THIS is what “checking the camp” meant. But this year has been mild. Snow fall has been minimal. Let’s face it. We needed a day away. The camper was fine. All bundled up in its tarp, just the way we left it in October. So the rest of the day was spent looking at the water. Hubby bemoaned the fact that he’d left his fly pole at home. He would’ve loved to be right out there with these guys. Never mind that he was bundled up against the wind as it was. Standing in icy water? Nah. From Confluence, we headed downriver to Ohiopyle. I love photographing the falls and the rapids. Only two more months until camping season!
Post a Comment
Read more

February 15, 2012
We’re on to the next phase of drilling. The rig is up. The good news is I can’t see it from the house. It’s just over the hill far enough to be blocked from view. I can, however, hear machinery when I step outside. No big deal. Hopefully the bulk of the noise will be done by the time open-window weather arrives. Speaking of which… I have spring fever. Yes, it’s been an incredibly mild winter. I haven’t bemoaned my loathing for the season even once. That has to be a first. Today is gray and chilly. No snow, but no hint of spring either. Still I have the fever. Either that or I just want to run away from home. I thought life would be a little less stressful now that Hubby has a new job. Not so. Without going into details, let’s just say I need a vacation. A real vacation isn’t in the cards. Hasn’t been for the last three years or so. Our measly vacation budget is used up on the annual rental for our camp in Confluence. And that’s okay. I just have to hang on until m
4 comments
Read more

February 08, 2012
We've been officially notified. The drilling is about to commence. I'm blogging about it at Working Stiffs today.
Post a Comment
Read more

February 06, 2012
That’s definitely an oxymoron. But it’s also my life at the moment. My husband started a new job this morning. After seven months of unemployment, followed by a little over a year at a job he was extremely uncomfortable with (cleaning up “stuff” in an emergency department is NOT a good fit for a germophobe), he’s on to a new chapter. Hopefully a better one. I felt like a mom sending her little one off to his first day of school this morning. Happy, but a bit worried. This new job creates huge changes for me, too. His old job was steady three to eleven. It took a while to get used to having him around in the morning. I had to come up with a strategy to get my writing done with Hubby underfoot. It was a practice in patience. I learned to tune a lot out. I also learned to close the door to my writing cave. But then, after he left, I had the afternoon and evening all to myself. I admit I liked it. This new job involves Hubby working all three shifts. This week, while he’s
2 comments
Read more 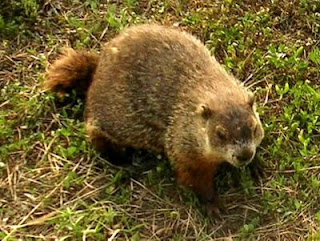 Usually by early February I’m so stinking sick of winter, I’m ready to shoot the darned varmint that wants to tell me I have to endure six more weeks of it. OR, on the rare instance when he says it’ll be an early spring, I want to shoot the darned varmint because I know it’s a lie. Yes, if he sees his shadow we have six more weeks of winter. If he doesn’t, about a month and a half. That’s just the way it is. This year, however, I’m feeling more kindly toward the old rodent. Yesterday and the day before we almost hit sixty degrees. Six more weeks of that? Okay. I’ll take it. Today is a little chilly at 39 degrees. But that’s not bad. There’s no snow. No ice. Yeah, I can definitely live with it. I know, I know. There are those people who LIKE cold weather. They like skiing and sledding and all that cold weather sport stuff. I am not one of them. You guys had last winter to enjoy yourselves. I’m laying claim to this one. Plus it is only early February. Old Man Winter s
Post a Comment
Read more
More posts